Your friends bleeding you?

At some point in your life I’m sure you’ve washed clothes if you’re old enough to do so. In doing so I’m sure that at some point you’ve washed some that’s bled on others in the wash. It’s very frustrating for this to happen especially if it’s happened on more than one occasion!

As a young man, as I was learning life, I had this happen on a number of occasions. Most of the times it either involved darker towels that bled on each other or even jeans that bled on other clothes. It’s definitely a costly lesson to learn. It’s a little frustrating to pull out what was suppose to be a white towel or T-shirt that is now pink or or blue or black.

Why did this happen though? Well, in my case, I was usually a little lazy and just threw everything into one load and the new towels would bleed onto whatever else was in there. So the problem lies in the fact that I didn’t separate the clothes. Sometimes it’s necessary to separate the lights and the darks or the clothes from the towels to make sure nothing is ruined during the wash cycle.

What could happen when you don’t separate the clothes before you put them in the wash? Well, for starters it could cost you money. Often times once your clothes got stained or bled on by other colors you would either trash them or they turned into yard working clothes or something like that. The second thing that might happen is you might feel a little heartbroken if your favorite shirt or pair of pants became discolored while in the washing machine. You might often also end up throwing them away. One thing is certain though and that is if you were to have these things happen then you would likely learn your lesson and not let it happen again because it could become costly.

What does separating clothes have to do with anything? 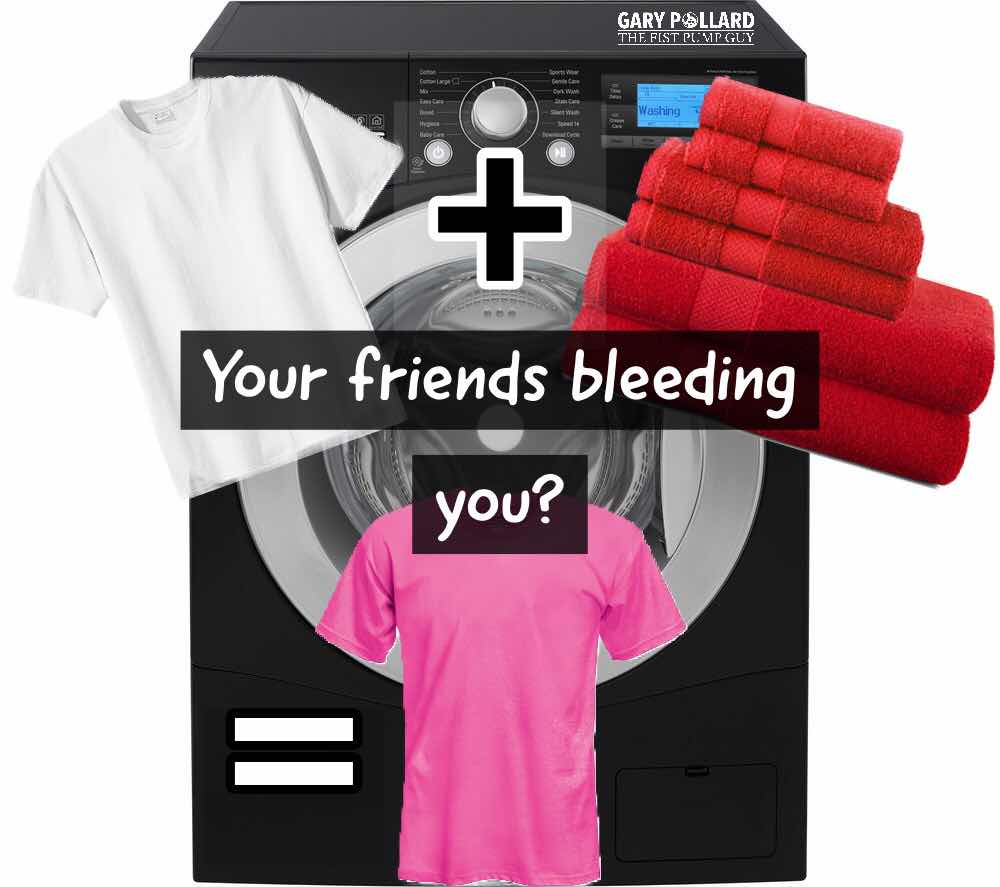 Let’s apply it to life in which I think many of you will be able to relate!

Have you often times had to fight many battles that you thought might be unnecessary? Have you been in constant struggles that you feel there is no way out from? Have you been placed in difficult situations which required difficult decisions? Have you possibly had problems trusting people or maybe even landing the job you want?

If you have then you may need to evaluate the people you are around or hang around on a regular basis!

The reason I say that is the fact that often times, though you don’t intend it, the people you hang around have a tremendous effect on you and many times it isn’t a good effect! Often times they are bad influences whether it’s a friend, family member or even a coworker. It could even be someone you grew up with or maybe even a mentor that has been a bad influence on you and because you were close to them you couldn’t see it.

I want to submit to you why I think that you must separate yourself from those same bad influences and what may happen if you stay in their company.

1) They can hurt your reputation because often times we are guilty by association. Somebody may see us with a certain individual and just assume we are doing the same bad things they are. It’s unfair seemingly but it definitely could happen! So, the next time you miss a promotion or don’t get the job you wanted you need to look at your center of influence and see if there is someone there that is affecting your reputation and contributing to the downfalls or shortcomings in your life!

2) They could be costing you money! Ever seem to go through your paycheck faster than you thought? Ever run out of money after the first weekend after you got paid? Do you seemingly support someone else’s habit?   Do you end up paying every time you and your best friend go out? Yes?! Then chances are you have someone in your life that is taking advantage of you and costing you money!  I’m not saying this happens in every case but in my case this was a big indicator. You may need to have a separation!

3) They could cause you to have trust issues! This could come from family or friends that’s maybe taken advantage of you or hurt you in someway. In many ways this one will hurt more of your future relationships than any of the others and is often times the hardest one to fix or get over. If you constantly have someone in your life that is taking advantage of you, lying to you or maybe even hurting you in some way then it may be that you need to separate from that friend or family member.

4) They could be keeping you surrounded by the temptations that you are trying to get away from! This one is also tough and dangerous. It could be a variety of things that this one covers from drugs to theft but whatever the vice or addiction it doesn’t help to stay around the people that possibly helped you start your habit in the first place and these are also the ones that are usually enticing you continuously! You need to separate yourself and not allow them to dictate the direction of your life through temptations!

All 4 of these things come down to the fact that often times these people that are causing these things in your life are really just trying to hold you down and hold you back. Many times they aren’t going anywhere in life and they just want company. They are usually the ones complaining that they have no money and no one will give them a job. They are often the same ones asking you to front them some money or wanting you to take them out so you can pay. It’s easy to see them if you’re looking for them! I didn’t use to be able to see them when I liked their company!

If you are constantly struggling in certain aspects in life then you may need to evaluate your company. It may not always be the people you’re hanging around but definitely could be. If it turns out that you have bad influencers in your life then it may be time to separate the laundry so they don’t bleed you anymore!
Posted by The Fist Pump Guy at 10:38 AM