Who are your blinkers for?

Have you ever been driving down the road and someone cuts over in front of you really quickly or maybe makes a quick turn right in front of you without using their blinkers? How did it make you feel? Did it scare you or make you angry? Have you ever done it to someone else? I’m betting that if you’re a driver then you’ve done it at some point or another.

Who are your blinkers for? 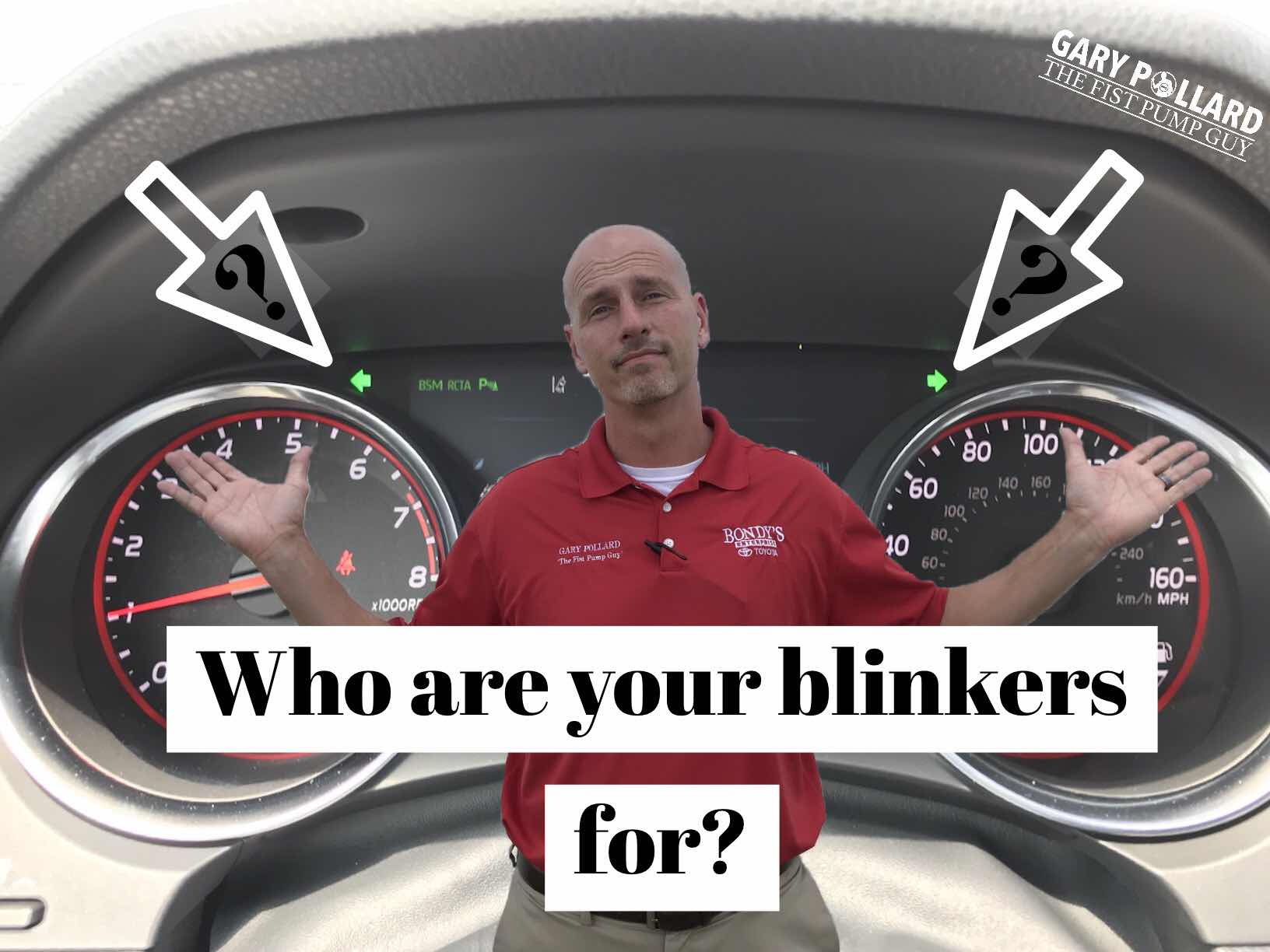 Have you ever thought about that? We drive our cars almost everyday and we probably haven’t really even thought about this question. If you really think about it then it is pretty obvious that the blinkers, in your car, aren’t for you. They aren’t for you! Then who are they for? They are for other people that’s outside your vehicle. They are for the people driving other cars. They are for pedestrians possibly riding a bike or walking down the sidewalk to let them know that you may indeed be changing lanes or maybe even turning.

1)  We aren’t always considerate of other people. Many times we don’t think about other people even though we may claim to. We often want to make ourselves believe that we are always thinking of others and always considerate but you probably don’t use your blinkers all the time either! I know that not using your blinkers is not the end of the world and doesn’t always mean we are inconsiderate all the time but just stay with me because I am going somewhere with this.

2) We are always in a hurry. We have busy lives and we always seem to be in a hurry to get somewhere or do something. We often are always running late to work, school or an engagement so we don’t have time to slow down much less use our blinkers. I know that we still use our blinkers sometimes when we get in a hurry but it’s probably very likely that we forget to use them as much as we usually do when we aren’t in a hurry.

Regardless if your aren’t considerate of other people or you are always in a hurry using your blinkers are important. We need to be able to let people know where we are going and what we are doing while we are driving. We sometimes probably take the fact that other drivers will know what we are going to do and maybe not use them but any of these could cause an accident and maybe even hurt someone.

Where am I going with this common sense stuff?

How does this fit into our lives and become a life lesson?

We walk through life sometimes and take things for granted. We walk by people without acknowledging them or speaking. Sometimes we don’t acknowledge people that may be having a bad day or don’t say “hi” or “how are you doing?”. We sometimes seem to look past people just so we won’t have to say something to them. Have you ever purposely ignored someone or acted like you didn’t see them just so you wouldn’t have to talk to them? I’m sure you have at some point!

So why do we do this? What makes us act like this towards other people? And how does not using your blinkers become an example of how we treat people?

1) Just like we are inconsiderate for not using our blinkers sometimes we are also inconsiderate of other people we are around everyday. We come into contact with many people every day. We have people we work with, converse with or even see at the gas station or the grocery store and yet, with all those people we see, we go out of our way to ignore and dodge them. I’m not always the most cordial guy either so this applys to me as well. I also understand that not everyone will nod or speak back if you acknowledge them so I get the fact that it can get tiresome trying to be nice to people especially since some, if not most, will reject your friendliness.

2) We are in such a big hurry in life that we seemingly don’t have time to acknowledge others. We are walking fast past people or maybe just have our head down so that we won’t have to acknowledge others. We always seem to be running too late to speak or say hi to someone. It’s almost like we are in a race and the only participant is us and we are the only one we are concerned about.

Whether you are inconsiderate to others or even in a big hurry all the time it is important to understand one thing! You never know when something you say or an action you do to someone can effect their day or maybe even their life. You never know how awful of a day someone is having or what has happened in their life recently. So when you are ignoring, being inconsiderate or in too big of a hurry to notice people you may miss the chance to change their day or make a difference. I’m not saying that every time you speak to someone that they will all of a sudden change their outlook on life but it couldn’t hurt. Maybe you are the icing on the cake. Maybe they had been having a terrible time in their life and you just happen to be the final piece to the puzzle.

My point to all this is to take time in your life and try and make a difference in someone’s life. It could be a simple “good morning” or maybe just asking how their day is going or if you can help them with something that can change their outlook. Maybe it’s just noticing the fact that they are struggling with something and listening. Somtimes just the mere offering of an ear can make a world of difference to someone’s life. Be courteous, be considerate, stop being in so big of a hurry and acknowledge others because we all live here together so why not at least try to make a difference.

Though we aren’t going to be perfect at this it only takes 1 to make a difference in someone else’s life!

Email ThisBlogThis!Share to TwitterShare to FacebookShare to Pinterest
Labels: blinkers, consideration of others, inconsiderate, thinking of others