How much dirt is under your rug?

Saturdays at our dealership we are furnished lunch so that way we can make sure that we are here and available to assist customers. Well, this past Saturday we had fried chicken which is something we have about once a month or so. Each time we have it there is quite the mess left on the table. Well, everything was cleaned up before we left and all seemed to be in order. Today, as we prepared to have the morning meeting, I pulled out a chair and there were the remnants of the lunch from Saturday in the way of fried chicken skin in the seat. How gross and disgusting! I can’t imagine what some visitors may have thought had they seen that!

Finding these dirty chairs got me to thinking about how this is very similar to seeing someone sweep dirt under the rug on some of the old cartoons that I use to watch. Often times there would be a character that was responsible for cleaning the floor but instead of scooping up the trash and putting it in the can they simply lifted up the corner of the rug and swept it under there.

It started me thinking to why someone might actually do that and how could I relate this to life.

First, why would someone sweep the dirt under the rug because if you did that enough the rug wouldn’t lay flat? Second, wouldn’t it be simpler to go ahead and scoop up the trash now instead of having to deal with it later on down the road? These should be obvious but what would make someone want to do this?

3) Maybe they just don’t want to deal with the dirt!
All of these could be a reason why but none are good enough reasons really because it would be more work down the road if you were to keep putting it off.

So, how does this effect you and what could possibly happen if you continued to sweep your dirt under the rug and hide it?

1) It ultimately becomes a bigger mess than it would’ve been had you cleaned it up when you first were sweeping! If you had just taken a little extra time to scoop it up there wouldn’t be a huge lump on the rug where the trash has been accumulating! Instead of being able to get the dirt up with one small scoop with the dust pan now you may have to make multiple trips.

2) It usually becomes harder to deal with! With a bigger mess comes bigger problems. When you allow the dirt to pile up instead of dealing with it you will get to the point where it’s hard to deal with at all and you won’t want to. You may let it get to the point to where you feel there is no way out.

3) Someone else will find it! Think about this as a kid cleaning their room. You ask them to clean it and they say they do but then you start wondering how they cleaned it so fast so you decide to check. You open up the closet door and an avalanche of stuff comes down on you. This is what happens when you consistently allow your dirt to pile up! It piles up until someone else finds it and now there is no way to hide it and more than likely you will be much more embarrassed than you would’ve had you cleaned the dirt up when you swept.

How does this apply to life? 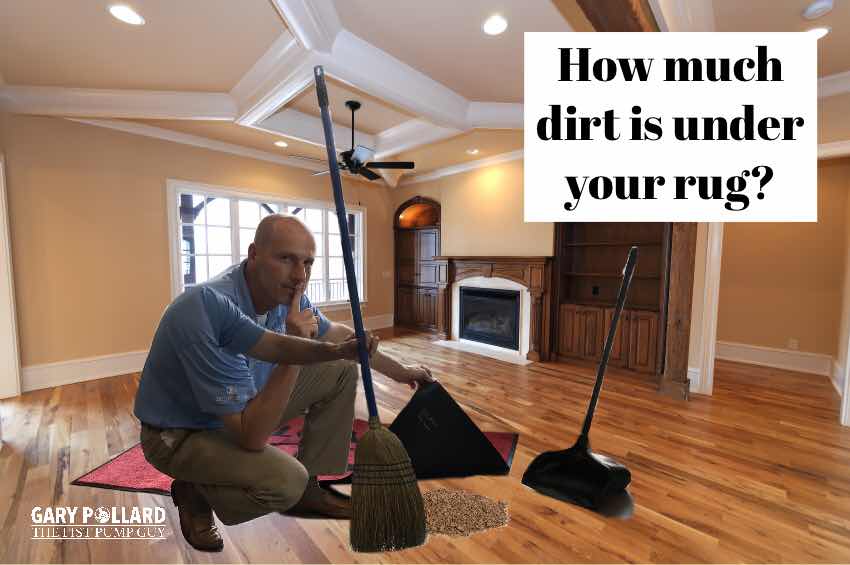 Simple! We often times don’t want to deal with the dirt we have in our lives! Maybe it’s dirt we created or maybe it’s the result of someone else but either way we don’t deal with it. We keep letting it build and build until it becomes a bigger mess than it would’ve had we acknowledge it and dealt with it from the beginning! It is much harder to deal with as you sweep it under the rug or pile it in the closet and you get to the point where you think it’s gone or you forget about it until someone opens the closet or lifts the rug and sees all the dirt you didn’t want to deal with. Now you have a harder time and a longer road ahead of you to clean up the mess.

The moral of this analogy is that it is much better to own up to and deal with the mess you make early on because you don’t want it to become too big of a mess to clean up. Though you seem to be hiding the dirt and it does seem to be hidden well in the beginning eventually the carpet won’t lay flat and the closet door won’t close and it will be visible to everyone at that point so doesn’t it make sense to deal with your dirt early on? Don’t wait until someone else finds it before you want to deal with it because then it may be too late!
Posted by The Fist Pump Guy at 12:50 PM

Email ThisBlogThis!Share to TwitterShare to FacebookShare to Pinterest
Labels: building reputation, cleaning your room, dirt under your rug, hiding your dirt, skeletons in the closet