Do you feel trapped?

Why are we so surprised when a wild animal goes wild? This is the question that I asked on my morning video this morning. The reason I decided to talk about this subject is mainly because of the event that happened over the weekend at a zoo here in the U.S. Apparently a Jaguar got loose in the zoo and killed a few animals. I don't think any people were harmed and I'm not really sure what happened to the Jaguar at this point but I still want to use this as an analogy to get you thinking.

I often hear stories of people getting attacked by wild animals. Many of these animals that are doing the attacking are wild animals that may be in zoos or carnivals or maybe even used for some type of shows but that's not necessarily the only times these attacks happen. I agree that attacks can happen in the wild and with unprovoked animals but the main ones I want to refer to now are the ones that are kept in captivity of some sort.

Think about the people that "train" bears for example, what would we say if the trainers were eventually mauled by a big Grizzly? Or what would we think if someone that trained tigers or lions got attacked and eaten during some training session or during a show? If you heard about some divers that liked to swim with the sharks ended up being attacked by the very sharks they were swimming with what would you say? Or if you happen to hear about an alligator handler putting his head in a gators mouth and ended up getting chomped on what would you think? What about a snake "charmer" that might have gotten bitten by one of the snakes he was trying to charm? What would you say about that?

Though very unfortunate and sad as these may be the very first thing that I think is... "Why are we so shocked when a wild animal acts wild?" Should we be surprised at all when a wild animal uses its natural wild instincts or abilities? Why must it shock us when we hear about someone getting attacked by one of the WILD animals they are in the ring or cage with? Heck, for that matter, I'm not really surprised much when a "domesticated" animal attacks someone much less a "wild" animal. I don't want to see anyone attacked by any animal but I hope you see my point.

And the point is this...

When given the opportunity, a wild animal will try to escape. They will resort back to their natural instincts when threatened or if they desire food. It doesn't really surprise me when I hear of an animal getting out in the zoo by jumping a fence or climbing a wall. Granted, many of the animals that we encounter in the zoos are not dangerous for the most part but for this post I am wanting to point out that most animals, dangerous or not, would possibly try to escape when given the opportunity. 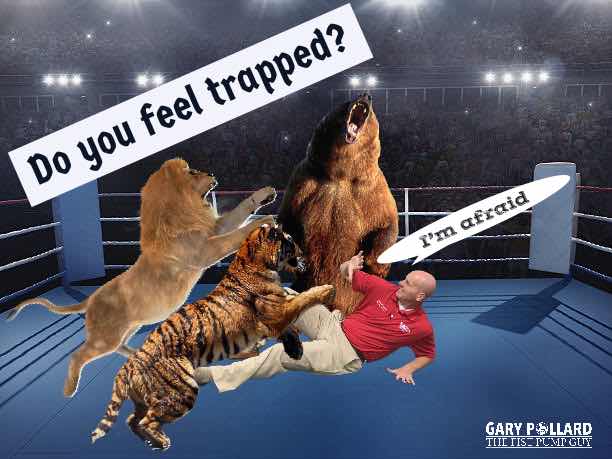 Well, in life we seem to be just the opposite of the wild animals. Instead of desiring to and trying to escape from what seems to be a captive situation we seem to relish in it. We often times talk about how unhappy we are in a job, for example, but instead of doing something about it we just continue to hold on no matter how unhappy we are. Instead of taking a way out we get scared and don’t pursue the opportunity to be free. Unlike the animals that desire to escape, and will when given that opportunity, we seem to be afraid and would rather continue on as we are.

Why is this? I don't really know all the answers but I will offer one.

I think the main reason why we do this is because of FEAR. We are afraid to fail, we are afraid to succeed or we are just plain afraid. We often allow fear to dictate all we do. We get comfortable in a certain situation or maybe a job and because we are comfortable we stay no matter how unhappy we are. We may be content with just getting by even though we might be miserable and though there may be a much better opportunity awaiting us. We may be so familiar with the situation we are in that we don't want to risk anything unnecessarily even though we probably should. Fear is one of the leading causes to us feeling like we are trapped in many of the situations we are in.

How do people get to this point? What makes people have the fear they have? Again, I don't know all the answers but I will give you a couple that I think contribute to this and both of these can actually fall under one category but I will go ahead and lay them out as I have them written down.

1) People make excuses. I am definitely guilty of this one. We tend to make excuses because we are simply afraid to try something or take a chance on something. We start thinking about the things that could happen if we go through with it and the excuses come flowing out. When this happens you tend to give up on whatever idea or plan that you might have had and usually don't even want to think about it or try it again. We allow fear to create excuses and it's usually to make us feel better about the decision that we made.

2) We blame others and play the victim. This is the one you probably witness the most today. When we get afraid we tend to like to blame others for a failure or a missed opportunity in life. We like to point the finger at others when we don't do something that we want to do. When something doesn't go our way we tend to not take that responsibility on ourselves. If we don’t get the promotion or the raise we don’t take responsibility. It’s always someone else’s fault! It’s so easy to blame others for our shortcomings or missed opportunities when many times it is because of us. But it’s so much easier to blame others in order for us to feel better about the situation.

Do you feel like you’re trapped? Do you feel like you’re in a cage and you don’t seem to want to leave? Are you comfortable there or are you just afraid to escape? Are you going to continue to stay there or are you going to be like that wild animal that can’t wait to escape? I know it’s fearful to try new things but letting fear control you can keep you from growing and doing new things in life. You have to stop using excuses and playing the victim! You have to almost get to the point to where you are very much uncomfortable in the situation you’re in to at least attempt to escape. Sometimes you have to climb over the wall, sometimes you have to dig under the fence or you may even need to cut the fence in order to get out just so you can say that you truly have given an effort to accomplish what you think you want to do. You don’t want to go through life with the regret of not at least trying simply because you are afraid. Remember that the grass isn’t always greener on the other side so you may need to research, plan and work harder just to find out what may be the best option for you.