Have you changed the play?

Many times there is a play signaled in from the sidelines and it is the quarterback's responsibility to make sure that it is called correctly in the huddle and to make sure the rest of the offense are on the same page. If the play isn't called correctly or maybe the signal is read wrong there could be some serious mix up with the rest of the offensive players and it turns into a broken play. But what if the quarterback told the team the correct play that was called in by the coach and then broke the huddle but instead of running that play he decided to run a different play without telling the rest of the players? What would happen? Well, many times, it ends up in a sack of the quarterback, possibly a costly turnover but could even lead up to a possible injury because maybe there was an unblocked defensive player that comes through without being touched and gets a clean hit.

As I said before, the quarterback is looked at as messing up the plays often times but if he were to run a play without telling everyone else what he is doing then he could actually cause damage.

So, what does this have to do with anything? We know about football! What are you getting at?... you might ask! 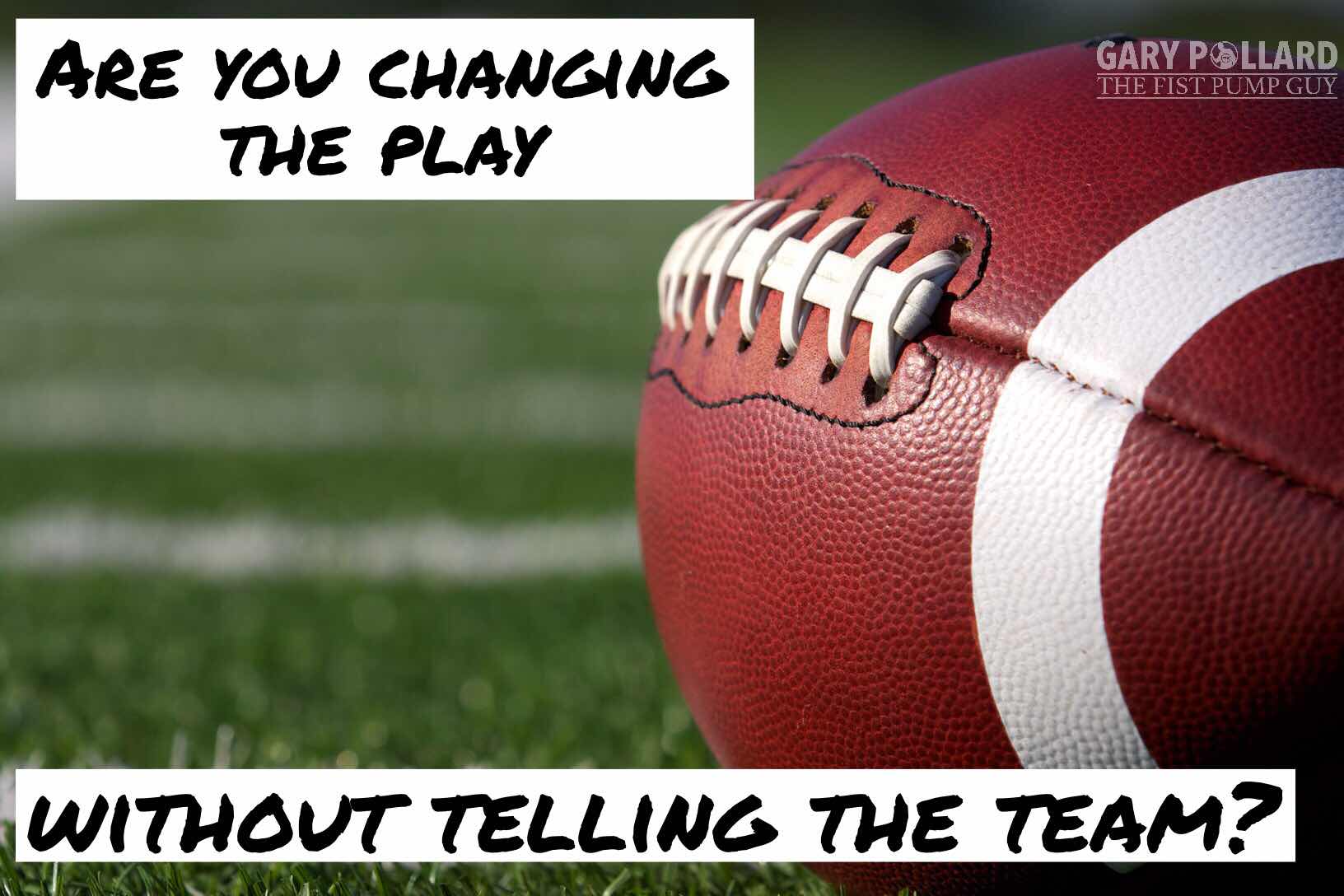 Much like a quarterback could effect the outcome of a game by changing the play without telling the team you might effect those around you if you don't do what you say you are going to do. Often times in life we don't do what we say we are going to do or promise to do and seemingly we move on without even worrying about how that might effect someone that we may be close to or possibly even a person that we might supervise as a manager. Having said that, I want to give a couple of reasons why you should do what you say you're going to do by giving you a couple of ways you could effect those same people.

The first, and probably most important one, is the fact that you could hurt someone. Hurting someone, especially a child or spouse, is the hardest one to overcome and rebound from. If you tell a child something, for example, they usually don't forget it and will often times be devastated if you don't follow through on a promise. I have been guilty of this in the past but have been trying my best to follow through with what I say but still come up short.

The second is the fact that if you don't do what you say that you could have people lose respect for you and in turn you could lose credibility and be known as someone that's untrustworthy. This could happen if you were a manager or a leader in the workplace or it could also be something that could happen in the home with the lack of trust from a loved one. Either way, much like the quarterback taking most of the scrutiny of a lost game as one that can't perform in crunch time, you could be viewed in the same light as being one that isn't capable of following through with a promise.

If you indeed care how your loved ones and maybe even employees view you then you need to follow through with what you say you are going to do. The unfortunate thing is that if you only messed this up one time it could have an everlasting effect on your relationships with them. That's a hard one to swallow but it's true. It's about like doing a million things right and no one notices until you do one thing wrong and that's what people always remember. You definitely want to be the one people remember for doing what you say you are going to do so don't mess it up by missing out on a promise that you gave.

Don't be known as the quarterback that lost the big game because those are never forgotten.... and not for a good reason either!
Posted by The Fist Pump Guy at 2:24 PM