How do you use your words?

There are 2 animals in the animal kingdom with very unique skills for driving away predators. These 2 animals aren’t ones you may see on a daily basis or maybe even in a lifetime unless you go to the zoo. I’m not sure they are necessarily rare or anything but they just stay out of the limelight in order to stay free from those predators.

The 2 animals that I’m referring to are the porcupine and the skunk.

The porcupine is part of the rodent family and can be found in South and North America. There is also some that live in Europe and Africa from my understanding. They typically live in wooded areas and can even climb trees. The porcupine can grow to between 12 and 35 pounds and has a unique defense mechanism. They have up to 30,000 quills on the rear of their bodies that are very sharp and can puncture what ever predator may be after them. They can stick into the animal and actually stay. The quills will grow back as they lose them. Though they don’t have poison on the quills they can have bacteria that can cause infection to the wounds of the predator. These quills would be very painful if ever stuck with them.

The skunk is a carnivor and it’s habitat is also primarily in North America and northern South America. They can be black and white in color and maybe even brown or cream colored. They have a very unique defense tactic that literally stinks! They are able to secrete a sulfur containing spray from around the anal area that really stinks. The skunk has the ability to spray it up to 10 feet and can do it up to 6 times in succession in which it may take up to 10 days to replenish. The spray is so strong that it can ward off bears and even be smelled by humans up to 3.5 miles away. Their spray can also cause eye irritation and possibly even temporary blindness.

Both of these animals have very unique and yet very effective defense mechanisms. They both primarily use their tools as a defensive weapon. They will mainly use these if they feel threatened by any predator. You typically wouldn’t see either one of these animals using their tactics as offensive weapons and attacking first but that is not to say it would never happen.

Why am I giving you a lesson about animals like this is Animal Kingdom? How does this effect you? 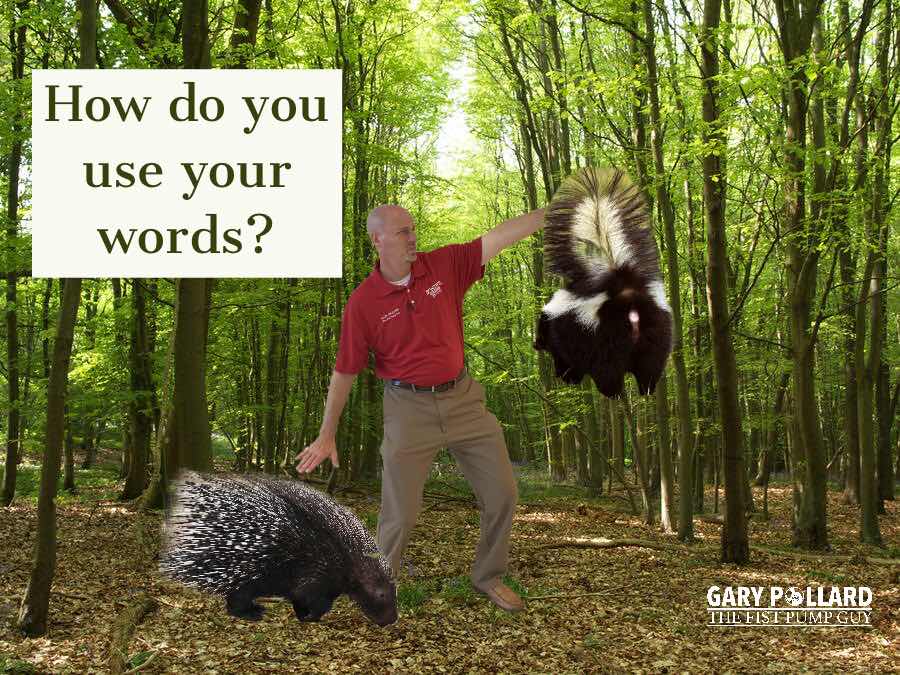 This is an analogy of how we use our strongest tool as a weapon to hurt others. The weapon that I’m talking about is our mouths. The reason it is so powerful is because it can be used to help others or hurt them. We are known to do both though hurting people with what we say seem to have a more lasting effect.

We can be like and unlike both of these a animals when we relate our mouths to the unique weapons they have.

We are unlike them in that they aren’t primarily an attacker of other animals. In other words their weapons are primarily for defensive necessity and not offensive. That’s sometimes how we are with our mouths. We tend to want to talk about people and tear them down. We may have some jealousy or envy that causes us to lash out against them verbally. We may not always do it directly but it happens nonetheless. We may say things we don’t mean but it sometimes still hurts them.

The way we can be like them with our mouths is since they primarily use their weapons on the defensive to hurt people we do same thing when we are attacked. If someone comes at us with some type of verbal aggression we usually become defensive and attack back with our words which really only adds fuel to the fire. It never really helps the situation when you respond with loud comebacks or profane language. All it does is fan the flame coming from the other person which only makes the situation worse.

If you really want to be able to address these situations the right way and make sure that an altercation ends in the best way possible there is 2 things that you can do.

1) Smile! Smiling is one of the best ways to overcome a situation where someone maybe trying to verbally attack you. It will help keep you from responding in an angry and negative way. It could also help affect the other person. Maybe they are going through something and they are just lashing out. Maybe seeing your smile will change their attitude.

2) Walk Away! Regardless of what anyone says it’s okay to walk away from a situation where there may end up being a verbal altercation. If you walk away then there will only be one standing there and it would be hard for them to attack themself. There is nothing wrong with walking away from a bad situation that could potentially get worse. Be the bigger person.

In the end it is very difficult to not ever have an altercation of some sort. You will eventually come across someone in life that will test all your patience and it will be tough but if you smile and let them know you’re not going down that road and then walk away it would be very hard for them to continue to test you.
Posted by The Fist Pump Guy at 6:15 PM

Email ThisBlogThis!Share to TwitterShare to FacebookShare to Pinterest
Labels: being defensive with your words, hurtful words, offensive words towards others, using your words