A new challenge can be a good thing!

This week begins a new journey for me in the car business. I decided to take a new position as internet sales manager in the current dealership that I’ve been employed by for the past 8 years. It was a tough decision for me so let me explain what made me take it and what I hope to accomplish through this promotion. 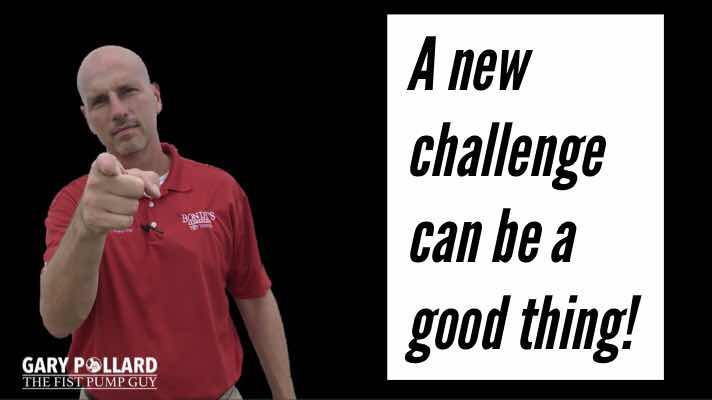 If you’re not familiar with my history let me give you some of it now before I get into the reason I took this new position.

I started working for Walmart in 1992 as a cart pusher at the age of 17 while I was a junior in high school. I really had no ambition in life other than playing basketball, partying and girls. Those were the only things that I thought I was good at back then. I wasn’t the ideal role model for employees back then. I called into work sometimes especially on the weekends. After I floundered through high school I wasn’t really sure what I wanted to do with my life since my hopes of playing in the NBA fell through. By the time I was 20 I decided to try to go back to school and enrolled at the local junior college but right before I started to school I was offered a promotion to Support Manager which would soon lead to an Assistant Manager position. I turned it down in the hopes that I would go to school and get a degree of some sort but there was a problem... I hated school. What was I thinking? I wasted who knows how much money going through that single semester of school.

So, after that debacle, I decided to take them up on the offer of the promotion. Soon after that I was given some keys and had some minor authority as a Support Manager. I held that position for approximately 3 months before I was promoted into the Assistant Manager’s training program at the ripe old age of 22 in 1997. It was a position that had a lot of responsibility and one in which I had no business being in since at the time I was very immature and lacked discipline though I was a hard worker for the most part. I continued in this position while moving to a few different stores on my way to a Co-Manager spot in a supercenter way up in Delaware and then back down to Foley Alabama. I was there over a year and a half or so before I left the company. I thought I had made it then but quickly found out that, even though I held the name of a manager, that I hadn’t quite learned what a leader was. I had some traits but wasn’t mature and dedicated enough at that point to be an effective leader in the workplace.

Fast forward to 2010 and I am now in the car business as a sales professional. I had no intention of staying in this business very long, most of us probably don’t when we first get in, but I continued in it. I became somewhat successful at first but was still somewhat immature in my dedication and effort even though I was always the first one to work and was always the one that finished his training first. I always knew the product and made friends easily and slowly became a mentor in the dealership to some aspect.

I originally had no desire to be a manager in this business. I often thought that it was way too much responsibility for me. I was very content being a salesman though I started growing in my leadership qualities. In 2013 I was offered the position of Product Specialist Manager which I took and held for a little over a year. I decided to step away from that position because it became tiring trying to find good help and found myself spending more time hiring, firing and disciplining than I did actually training and growing. At this point I decided to step back to the sales floor.

I have been able to provide for my family now for a while as a salesman and have really had no complaints other than the amount of hours that we work. I know often times we get a little frustrated with how long we have to work and maybe when we have trouble staying consistent on the income front. I’m not really sure what has been wrong with me but I needed something else and all of a sudden this position came open.

I know this may not mean much to everyone but I wanted to write this to let some know... if you’re struggling with what you are doing then maybe you need a new challenge. Maybe you need someone else to share your skills with to help them grow. Maybe you need an opportunity to try and grow even more yourself. Maybe it’s time that you step into a new role to help your dealership or business grow. Maybe you need a new opportunity to use your skills that you may or may not know you have. Maybe it’s finally time for you to step out of your shell and your comfort zone to do something new that can make a difference in yours or someone else’s life. Stop continuing to do something that is dragging you down and do something different if that’s what it takes to try and change the direction that you’re heading before it’s too late. It’s so easy to continue in what your not exactly happy doing because your comfortable all the while becoming more unhappy and less content when maybe what you need to do is make yourself more uncomfortable to become more comfortable and content.

Not really sure if this makes sense to all who read it but I wanted to try and help those that have been in the same position that I was in turn help them make a tough decision that they may be struggling with. It’s always tough to do something new that you’re not comfortable with but you will never know what you’re good at unless you first give it a try.